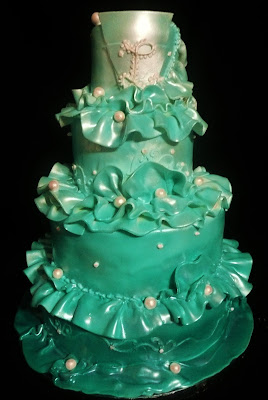 This 70th Birthday Cake was inspired in the Art Deco and  Miami Beach Glamour from the 1930.
Art Deco was an art movement that lasted from the 1920s until around 1940. It began in France with a group of French decorators, designers, and artists at an event called Exposition Internationale des Arts Décoratifs et Industriels Modernes—the name Art Deco was later coined from that title.
Art Deco was a very “modern” movement, celebrating the beauty of technology in the early 20th century. Art Deco contains many references to trains, planes, cars, and skyscrapers, mixing art with scientific advancement. Read More.

The cake was  Lemon Cake with Coconut cream and Vanilla cake with dulce De Leche.
And was delivered to the The Galloping Hill Caterers see more cakes at http://www.roxanascakes.com/